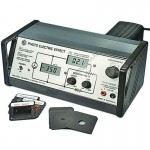 IEC PHOTOELECTRIC EFFECT AND PLANK'S CONSTANT
A well-designed instrument with two digital meters to simultaneously indicate both the current through the internal photo-cell and the backing voltage applied to the cell.

Experiments can be performed in the following areas:
 Photo Electric Effect - that light can create an electric current
 Illumination / Current relationship - that current changes with luminous intensity
 Energy of a Photon - that a photon can drive an electron from a surface
 Plancks Constant - the amazing relationship between energy and wavelength
 Energy Distribution - where the energy is expended

Features:
 Dual meters permit the backing voltage and the photo-cell current to be viewed together without requiring the switching from one to the other
 Removal of two selection switches makes readings quicker and less confusing
 Select nanoamps or microamps as the current range for some of the experiments

AP2342-001 IEC Digital Photo-Electric Effect Planck's Constant is a similar instrument but uses LEDs of specific wavelengths as the light sources to avoid the use and possible loss of colour filters.

This product is used in teaching these Australian Curriculum codes:
ACSPH137 - Revolutions in modern physics - Quantum theory - A wide range of phenomena, including black body radiation and the photoelectric effect, are explained using the concept of light quanta
ACSPH138 - Revolutions in modern physics - Quantum theory - Atoms of an element emit and absorb specific wavelengths of light that are unique to that element; this is the basis of spectral analysis
ACSPH136 - Revolutions in modern physics - Quantum theory - On the atomic level, electromagnetic radiation is emitted or absorbed in discrete packets called photons; the energy of a photon is proportional to its frequency; and the constant of proportionality, Plancks constant, can be determined experimentally (fo