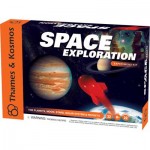 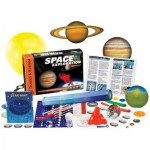 The Planets, Moon, Stars, Solar System & Rockets
Blast off on a mission to explore outer space and the objects in it. Learn about rocket propulsion with balloons and chemically powered rockets. Build a telescope and star map to investigate the stars and constellations. Assemble a model of the solar system and learn about the planets that share it.

Find out how Earth's rotation creates day and night, how Earth's axis and revolution around the sun causes the seasons and how the moon's rotation around Earth gives us the phases of the moon. See for yourself how meteorites formed the craters on the moon. Make a moon flipbook and a moon calendar. Build a sundial and a solar collector to experiment with the sun. Grasp a comet's tail and learn about how meteoroids become falling stars.

A full colour, 32-page experiment manual covers 22 experiments and guides your space exploration.
For ages 8 and up.

You will:
 launch three types of rockets
 build a telescope and star map
 model the solar system
 investigate the revolution and rotation of Earth
 swing a moon sling
 find the man in the moon
 recreate lunar and solar eclipses
 learn about falling stars
 discover how the universe is expanding

For more information:
View >>> Lists the contents of this kit, topics covered and includes some sample pages from the Experiment Manual.