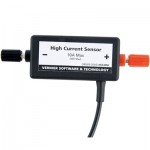 VERNIER HIGH CURRENT SENSOR
Use Vernier's High Current Sensor in experiments that involve currents larger than 1 A, such as solar panels, hand generators and other alternative energy projects.
The High Current Sensor measures currents from -10 to +10 Amps. It uses a Hall Effect chip so that it does not add a resistive element to your circuit. A metal shield over the Hall Effect chip reduces the influence of external magnets. A replaceable fuse protects the equipment and circuit.